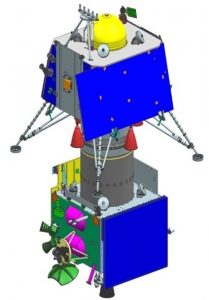 Orbiter will revolve around moon in a predefined orbit. Lander which is named as VIKRAM will do soft landing on moon. Rover named as Pragyan is part of Lander.After Landing on the moon’s surface, Rover will  seperate  from the Lander.It is designed to move around on the Moon Surface to collect valuable data. Chandrayaan2 mission is scheduled to be launched between 9th July 2019 and 16th July 2019

A Soft Landing on Moon’s Surface  will prove technical capabilities of ISRO.